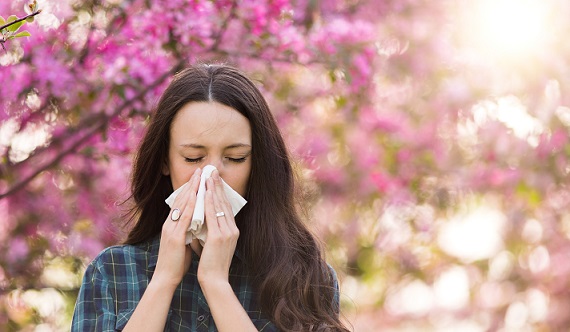 Pollen is one of the most common causes of allergies.

There are three major pollen groups:

The wind-pollinated plants are considered the most important from an allergy standpoint. These plants have no colorful flowers and release huge numbers of pollen grains. Many plants produce most of their pollen during the night and early morning hours, and are then spread in the air during the day.

Wind conditions have a great influence on the release of pollen and can carry the pollen high into the air by noon, only to drop again later in the afternoon. The wind can carry the pollen several miles. The highest pollen count occurs in the morning and late afternoon. Pollen counts are low on cold, rainy days and high on hot, dry days. Pollen grains will rapidly release allergen molecules into the water when in contact with rain or dew. When the molecules dry, they form small dust particles that can be inhaled. Ragweed pollen, a very important fall allergen (especially in Indiana), is prominent along roads and grain fields, land fill areas, and construction sites. Grass pollen is the most common cause of seasonal allergies on a worldwide scale. There are many different types of grass pollen that cross each other in the air (wild and cultivated grasses). Trees usually release pollen only in the springtime; grasses release pollen early spring through early summer, and ragweed releases pollen from late summer into autumn.

Prevention and avoidance are two measures used to control and lower pollen exposure. Keep windows in the home and car shut, especially when pollen (and mold) counts are high. Use air conditioning indoors and when in the car from early spring through late autumn. The air conditioner can eliminate most of the pollen by pulling the air through the filters of the conditioner. Avoid letting the air conditioner blow directly on you. Try to avoid being outdoors during the peak pollen hours (morning and late afternoon), and consider wearing a facemask working outdoors.

These are ways to control pollen exposure:

If the avoidance measures are not controlling symptoms and you find an increased need for more medication, then allergy immunotherapy may be considered as an option.

This form is not intended for patients with clinical questions. Please call to our main office phone number 317-844-5656.

Find us on the map